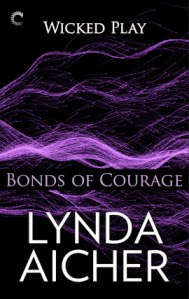 Holden is a hockey player that is in control of every facet of his life, but wants - needs - to turn over control in one area of his life. Unfortunately a picture leaked out and caused problems for him so he is anxious to put himself out there again. So when he goes to The Den he lies and states that he is a Dom, but Mistress V sees through that. V is actually Vanessa who knows Holden due to being a rep for athletes. Holden asks her to be his Mistess and she refuses. Vanessa has kept her personal and professional lives separate and Holden would definitely mess that up. Holden knows how badly he needs her and finally convinces her.

The scenes between these two were scorching hot.
The connection between V and Holden was so charged
and the first time he said,

"If it pleases you, Mistress."

I give Bonds of Courage 5 hearts!

Pro hockey player Holden Hauke has kept his sexual needs buried for years. After a near miss over a picture of him bound to a spanking bench resulted in a mid-season trade, he’s kept his image clean. But with the season over, he’s ready to surrender control. And he’s found just the woman to help him—if only he can convince her to give him a chance.

Bending men to her will is nothing new for Vanessa Delcour, aka Mistress V—she’s a full-time rep for pro athletes, a part-time owner of exclusive sex club The Den, and an experienced Domme. But when Holden Hauke comes looking for a discreet partner, Vanessa’s concerned about his motives. Touching his training-toned body during a scene wouldn’t exactly be a hardship, but taking him on crosses barriers between work and play that she’s had in place for years.

From their first intense encounter in Mistress V’s playroom, Hauke knows he can’t let this chance slip away; he’s found the woman he’s always needed. Submissive or not, he’s willing to push her every limit to prove how good they can be together.

Posted by She Hearts Books at 2:18 AM