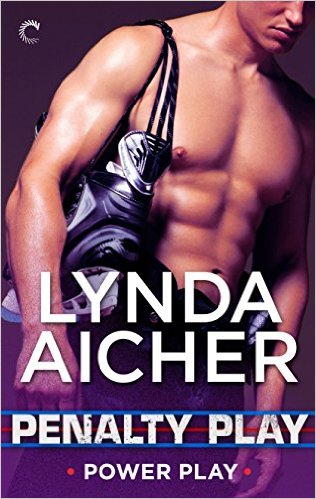 Henrik meets Jacqui at the music store she works at and so wants to get to know her better. Henrik is a professional hockey player and she's a music student which you would think makes them having little in common, but that is so not true. Turns out that Henrik is beyond musically inclined and is quite talented. Jacqui knows much about hockey since her brothers are passionate about the game. I loved their reaction when she brings Henrik home for family dinner. Hilarious. I really loved Henrik who was sweet and sexy. When he first meets Jacqui he is just so very lonely and I was so glad he found his match in Jacqui. I loved their story.

I give Penalty Play 5 hearts!

Minnesota Glaciers’ starting defenseman Henrik Grenick is good at two things: hockey and sex. He’s got it all—the career, the biceps, the babes. But the steady parade of women through his bedroom just leaves him wanting more, hunting for the next distraction. Until he meets Jacqui, who awakens a hunger he never knew he craved.

Fiercely independent Jacqui Polson has no time for the seductive hockey player demanding her attention. More band geek than bimbo, she’s in an entirely different league, and growing up with four hockey-crazed brothers left her with no interest in that world. But damn, Henrik’s hot. And when it comes to sex, Jacqui knows exactly what she wants.

As their relationship moves beyond games, Henrik needs more—not just of Jacqui’s touch, but of her. Jacqui discovers there's more to Henrik than just the gruff facade. But after a lifetime of fighting their own battles, neither has ever let anyone get so close. As they soon find out, needing someone isn’t a weakness, it’s the only thing that matters…