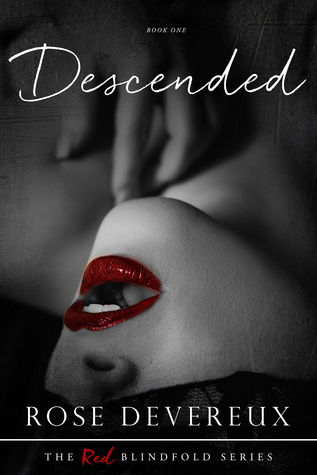 Sophie travels to do an expose on the Marquis de Sade and has the chance to interview one of his descendants. Marc is a scorching hot bossy man that enraptures Sophie introducing her to a lifestyle that he for a long time has resisted himself. They are sizzling together, but Sophie is scared of what he makes her feel. I enjoyed this part of their story and can't wait to read more.

I give Descended 4 hearts!

“When he said he wasn’t like other men, I should have believed him…”
It’s Sophie Quinn’s chance to make a name for herself. Her assignment: interview investor Marc Brayden, descendant of the most notorious sadist in history, the Marquis de Sade. Her mistake: falling hopelessly, obsessively in love.
Marc is mind-blowingly sexy, but determined to stay away from Sophie. She brings out powerful dominant urges that are dangerous to them both. But when he loses control, the pleasure is more than either of them can resist.
Sophie shut down her heart after too much betrayal and loss. Now she’s thousands of miles from home and under Marc’s spell. What is he hiding? Why do his desires torment him? Torn between love and the truth, she resolves to learn everything she can about Marc’s cryptic past, even if she risks losing him forever.

He won’t tell me where we’re going.
He sits across the backseat wearing a slim-cut black suit and a white shirt open at the throat. His profile is sharp, his eyes the color of sterling. Lips curving into a smile, he crosses his muscular arms and repeats what he’s said three times.
“Be patient.”
“I am,” I say.
“You’re not. Not even close.”
Through the car’s tinted windows I see fragments of the city – a river winding under gas-lit bridges, avenues that stretch for miles, gilded statues of goddesses and winged horses. Crouched gargoyles stare down from the side of a Gothic cathedral, their curved stone feet white with frost. I turn to look back at them but they’re lost in the February darkness.
“Give me your hands,” he says.
Dutifully, I hold them out. He kisses each one – first the back, then the palm. I’m surprised when he leaves them untied and places each one back in my lap.
“Lift your skirt.”
I raise the front but he shakes his head curtly. I should know by now. “I want your skin against the seat.”
As soon as he sees my naked flesh, his breath catches but he doesn’t touch me. Except for the occasional kiss, he has not touched me in days. Tonight, I understand how someone could die from desperate, unfulfilled desire. I slide closer to him, the black leather cold and smooth against the backs of my thighs.
He holds me away with a wave of his hand. “Not yet,” he says.
“When?”
He doesn’t answer. He just caresses my cheek so lightly it feels almost like my imagination.
We drive into a dim, maze-like part of the city where the streets are twisted and narrow. Just outside my window is a cemetery enclosed by a speared iron fence, its rails rusted and broken. Looking over the crumbling headstones, I think of the long-dead madman whose wicked legacy brought Marc and me together. While the madman’s tools were poison and torture, Marc uses his hand, scraps of leather, the withholding of his touch. It’s always by way of pain that one arrives at pleasure, he says. Until he met me, he wasn’t able to admit that to himself. Now, at last, he can.
“Look at me,” he says, and I turn to face him. The light from a streetlamp illuminates his dilated pupils and the hard angle of his jaw, then his face goes dark again. He reaches out and lets his fingers rest on the slope between my neck and shoulder. He loves my hair cropped short so that my neck is exposed and unencumbered, always available to him.
“You’ve never been more beautiful,” he says in a husky voice.
I’m so starved for him that his words make me breathless. Under my panties I’m shaved to the skin, and every vibration of the car reminds me of my hidden nakedness. I spent all afternoon preparing for this night, shadowing my eyes with dark purple powder and coloring my lips with a stain that won’t rub off no matter how many times I kneel between his powerful legs or bite the red silk scarf.
He strokes his thumb over my throat, pressing just hard enough that I can appreciate the strength in his hands.
“Marc, I –” I start to say, but force myself to stop.
“What?” His sculpted lips are parted, his eyebrows slightly raised. His teeth gleam though there is almost no light.
“Nothing,” I say.
“No secrets, Sophie. That’s what we promised each other.”
“Yes,” I say. “No secrets.”
He smiles because he knows what I was going to say. I love you. I can’t live without you. I’ve never spoken the words but I’ve never had to. I’ve come almost four thousand miles for him, left behind everything safe and familiar without a second thought.

She lives in sin with her boyfriend and two cats in Boston and New Hampshire.

Posted by She Hearts Books at 6:00 AM